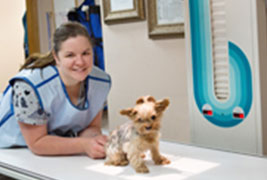 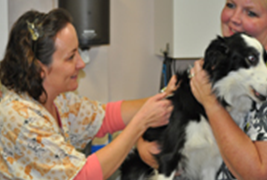 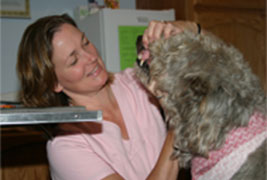 Kirsten Hiles, VeterinarianKirsten grew up in Stillwater, MN on a small hobby farm with cats, horses, and a dog. She attended the University of Wisconsin Madison and River Falls, graduating from River Falls with a bachelor’s degree in Business and French.Before enrolling in veterinary school, she worked in a few small animal hospitals as an assistant to the veterinarians. She also worked for a few horse trainers, staying active riding, training and managing the boarding facility. She graduated from the University of Minnesota School of Veterinary Medicine in 2014. After completing a one year equine focused internship, she is delighted to join Croix Valley Veterinary Team.Kirsten currently resides in Stillwater, MN with her husband, Nate and their two cats Penny and Yen and rescue dog Dharma. In her free time Kirsten enjoys riding her horse, an “off the track” thoroughbred named Opie and competing him in dressage, cross country and show jumping at local events and shows.

Vicki Datt, VeterinarianVicki (Johnson) Datt grew up on a small dairy farm near Cushing WI. She always loved all kinds of animals, and thought large animal practice would be her calling, but fate got in the way.Vicki received her Bachelor of Science degree from UW-River Falls in 1989, where she also enjoyed playing on the women’s basketball team. She graduated with a Doctor of Veterinary Medicine degree from U of MN in 1993.After eight pleasurable years in California, she is happy to be back in the Midwest, and especially the friendly town of Hudson.Vicki adores golf, exercising, reading, church activities, and baking, but most of all spending time with her husband, David, three sons and two dogs and two cats.

Becky Bohlmann, VeterinarianBecky grew up in Bemidji, MN on a small family farm with a few cows, chickens, the occasional pig and a large garden. She received undergraduate degrees in both biology and chemistry from Bemidji State University in 1998. She then went on to graduate from the University of Minnesota, College of Veterinary Medicine in 2004.Becky and her husband, Matt, live in River Falls with Tannis, the cat and their Scottish Terrier. In January, 2014 they were blessed with their first daughter, Morgan Rose.Before coming to Croix Valley, Becky worked at a small animal hospital in St. Paul for seven years. She likes horse back riding on her POA, Justice. She also enjoys spinning yarn on her spinning wheel with wool from local shepherds.

Nicole Parker, TechnicianNicole is the last hold over employee from when we purchased the clinic in 2003. Is she that good, or is she crazy for staying? She lives in Elmwood, WI with her husband, Dan, and her stepdaughter, Brandi. Nicole completed her Associates Degree in Veterinary Technology from Argosy University in 2006. She has special interests in anesthesia and critical care medicine.In her free time she enjoys barrel racing in the summer, watching NASCAR during the long winter months, running agility and rally with her dogs and spending time with family and friends. She lives with lots of animals, including six horses, three dogs; Deuce, a Mini Aussie, Steele, a Border Collie, and Harley, a Yorkie, two cats Chevy the tripod and blind little Gabby and an African grey named Oscar.Nicole especially likes the family atmosphere at Croix Valley, and developing relationships with clients and their pets. She also finds it heart warming to watch pets reunite excitedly with their owners after overcoming an illness.

Rhonda Armbruster, TechnicianRhonda resides in River Falls, WI with her Golden Retriever, Lexi, her Australian Shepherd, Otis, Misty, the Shih Tzu, a German Shepherd, Ike and her three cats, Coboo, Scamper and Rio.She completed her Associates Degree in Veterinary Technology from the Medical Institute of MN in 2000. Rhonda worked in a mixed animal practice for several years before we convinced her to come to Croix Valley. Rhonda loves fostering animals, especially baby kittens, and finding them good homes. She also enjoys traveling and spending time with family, friends and her animals.She feels the best part of her job is forming relationships with our clients and their pets.

Lisa Merker, TechnicianLisa was born and raised on a hobby farm where she quickly formed a bond with the animals. Raising, training and showing livestock was what her life was about. Now Lisa enjoys spending time training her dogs, Pippin the lab and Ginger the Catahoula, napping with her orange tabby cats, Yoyo and Cammy, reading and spending time with her husband, Eric.Lisa has a bachelors degree in Animal Science from the University of Wisconsin at River Falls and an associated degree in Veterinary Technology from Globe University.

Kee Leichtle, StaffKee was born in South Korea. He and his brother were adopted and now live in River Falls. Kee graduated from River Falls High School in 2010. He was blessed with many animals growing up, including a turtle and Jerry, the guinea pig. Currently he has a Keeshond named Teddy. Kee has a great love of animals and hopes to one day be a veterinary technician. He also likes recording music, writing, and acting. In his spare time he enjoys long walks, reading and watching movies.

Grace Johnston, Kennel AttendantsGrace was born in Houston, Texas and moved here when she was three years old. She has three brothers, three sisters, and a new sister-in-law. She has been home schooled by her Mom and Dad her entire life and loves it! Learning new languages, math, and science are her favorites.Animals are not scarce in the Johnston household, with one Beagle mix, Argos, two bearded dragons, Sandy & Domino, a fish tank, and the occasional toad, frog, skink, or salamander sneak in. Grace loves training animals, photography with her Dad, acting, babysitting, long walks with her dog, learning new stuff, and raiding the library. She would like to become an animal trainer or behaviorist, but most of all she would love to be a mom.